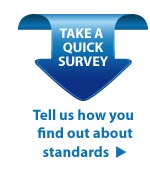 As we look ahead to 2013, we have some exciting work ahead in standards. Stay tuned for information on the upcoming release of IEEE-1800 System Verilog, plans for UVM 1.2, continued progress on SystemC, and contributions on SystemRDL.

On behalf of all of us at Accellera Systems Initiative, I wish you a healthy and happy holiday season.  If you have any comments or suggestions for us, we welcome you to contact us. We look forward to 2013 as we get ready for another excellent year in standards innovations.

On November 15, I, in my role as Chair of the IEEE Design Automation Standards Committee (DASC), and Dennis Brophy, in his role as co-convener of the International Electrotechnical Commission (IEC) Working Group (TC91 WG13) that handles EDA standards, met in Yokohama Japan with representatives of the JEITA EDA Technical Committee (henceforth, the "EDA-TC").

JEITA, (the Japan Electronics and Information Technology Association), is comprised of multiple boards (e.g., a Consumer Electronics Board, a Display Devices Board and a Semiconductor Board, among others) that are staffed by representatives from the largest electronics companies and universities in Japan. The EDA-TC, which falls under the JEITA Semiconductor Board, has members from Fujitsu, Sony, Panasonic, Renesas Electronics, Toshiba, Canon, Zuken, Denso, Cadence KK, Nihon Synopsys, NEC, Mentor Graphics Japan and Ricoh, along with Osaka and Kinki Universities. Its structure is seen below: 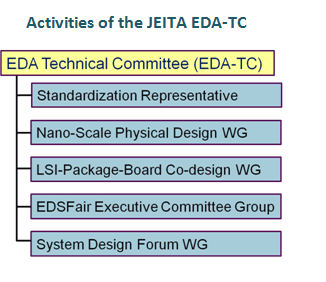 With regard to standards representation, the EDA-TC closely tracks EDA standards of interest, especially IEEE DASC standards—including several that were originally developed by Accellera Systems Initiative. For example, when I chaired the P1666 (SystemC) WG in 2009-2010, we received a considerable amount of feedback from EDA-TC members, and several of them attended our WG meetings even though those meetings took place in the middle of the night in Japan. The EDA-TC similarly closely followed the progress of the recently approved IEEE P1800-2012 (SystemVerilog) standard and the P1801 (UPF) standard currently under revision. Furthermore, as a member of the IEEE Standards Association, the EDA-TC also joined the Ballot Group for each of these standards.

The EDA-TC also develops its own EDA standards. For example, in March 2012 they created a LSI-PKG-Board Co-design standard and are now seeking a way to turn this into an international standard. Previously they developed the "Bird’s-eye View of Design Languages (BVDL)," a high-level view of the purposes and relationships between various design and verification languages. The BVDL is on course to become an IEC standard.

In addition, the EDA-TC is currently working on a Nano-Scale Physical Design standard. The working group for this nascent standard has been addressing advanced technology-related issues including process variation, double patterning and so forth. They believe that statistical parasitic information may be a promising candidate for standardization.

Finally, the EDA-TC not only tracks various EDA standards and creates several of its own, but it also helps organize events that help promote both EDA standards and the tools that implement them. For example, it organizes the Electronic Design and Solutions Fair (EDSFair) held every year in Yokohama and the System Design Forum, a smaller but focused event that tackles issues related to system design in an in-depth manner.

During our meeting, the EDA-TC representatives gave a report on their activities to me, Dennis and other DASC members who participated via a conference call. In turn, Karen Pieper and Neil Korpusik (Chair and Vice-Chair of the IEEE SystemVerilog WG) gave a recap of the work that their group successfully completed in developing the 1800-2012 standard. Next, I presented a report prepared by John Biggs, Chair of the P1801 UPF WG. This report focused on the recently completed first ballot of what is hoped will be the 1801-2013 standard. The EDA-TC has closely followed the IEEE UPF work and has attached several comments to their vote that they would like to see resolved.

Finally, Satoshi Kojima, the other co-convener (with Dennis Brophy) of the TC91 WG13 group that handles EDA standards in the IEC, gave an update on the status of the various IEEE DASC standards that either have or are on the way to obtaining "dual logo" (IEEE and IEC) status. To see the importance of dual logo status, first note that while the IEEE Standards Associations are comprised of individuals and "entities" (companies, non-profit organizations, universities, etc.), the IEC WGs are made up of representative countries (U.S., Japan, China, Germany, etc.). Because of this, many National Standards organizations put a premium on standards that come from the IEC rather than the IEEE. Thus, having IEEE standards also become IEC standards—obtaining dual logo status—is very important to the international proliferation of such standards. I was pleased that Kojima-san reported excellent progress regarding the development of several IEEE DASC standards to such status. 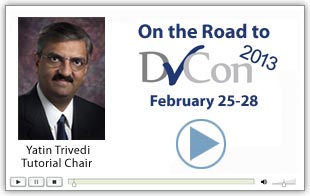 Find out more about DVCon >

Calling all users: It's time to honor your peers for their contributions to standards!

Nominations are being held through January 18 for the 2013 Technical Excellence Award. The award recognizes outstanding contributions in the creation of EDA and IP standards by a member of an Accellera technical committee. Any individual who is a member of an Accellera technical committee is eligible to receive the award. Candidates may be nominated by the industry at large and are endorsed by Accellera committee members.

Newsletters are emailed to all Accellera Systems Initiative member employees and community participants. They contain news and event updates from accellera.org. If you do not wish to receive newsletters via email, you can unsubscribe in your account settings at www.accellera.org under the Workspace tab.

Add accellera.org to your list of acceptable domains to make sure you receive updates from Accellera Systems Initiative.

If you have questions or need assistance, please contact:

Jill Jacobs
This email address is being protected from spambots. You need JavaScript enabled to view it.